The story takes place in the kingdom of Ivalice, a country where castles and forts are the stronghold of nobles, the church is a powerful religio-political entity, and warring factions remain in the struggle for dominance over the land. At this time, A drama shot from the gamenobles regarded commoners and peasants as animals, and most commoners have given up life, choosing to revolt against the nobles for having abandoned them after the war.

The main character's name by default is Ramza Beoulve, the third-youngest of four siblings who is conscious about his surroundings and remains firm in his quest to seek the truth behind the war. He is joined by a cadre of characters which include Delita Hyral, his closest friend; and Agrias Oaks, the holy knight in charge of protecting Princess Ovelia, candidate heir to the throne of Ivalice.

Final Fantasy Tactics begins with Ivalice just recovering from the Fifty Year War against Ordalia, and the power vacuum caused by the death of its ruler soon after, King Omdoria, sparked another conflict. Princess Ovelia and the younger Prince Orinas are both candidates to the throne, with the former supported by Prince Goltana of the Black Lion, and the latter by Queen Ruvelia and her brother, Prince Larg of the White Lion. This erupted into a full scale war known as the "War of the Lions", with either side using whatever means possible to secure their place in the throne, this included bearing an illegitimate child, killing other possible heirs, betrayal, assassination and false identities. 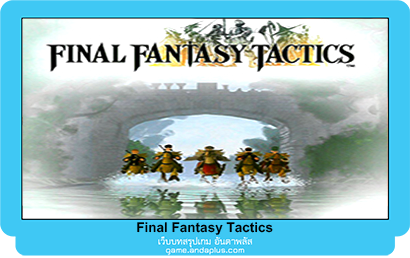