How does one go about describing the game that began it all? Yes Dragon Quest (Dragon Warrior in the USA at the time) was released before Final Fantasy, but when it was released, Final Fantasy beat it hands down. There is one word that comes to mind when speaking of Final Fantasy…timeless.

When released in 1987, Final Fantasy was showered with great reviews from all kinds of Japanese magazines and companies. It brought about a financial turn around for the slumping Squaresoft, and created one of the largest video game franchises the world has seen. It certainly took the standards of RPG and video games in general to a new height. It is cited as being one of the most influential games on the NES console, as well as being the one that opened the doors to the genre.
This game has everything going for it, graphics being the first. Though NES graphics are severely outdated here in the new century, it was certainly a fantastic game for the time. It had full screen areas, maps, detailed and colored beautifully. There was no framework wall, or half done town. It was all complete, and you could travel almost anywhere in it you wished. Or at least your level and experience would allow you to.
The enemy and character sprites were done with great attention to detail for the time as well. And to add to this, when fighting, your characters were animated in their motions. This was extremely rare for the time, and definitely for the genre. To top that off, the different weapons and spells used utilized their own sprites in battle. For someone of the time, these leaps in graphics were just jaw dropping. It just had not been done with such detail before. It certainly has been emulated by almost all RPG games since.
Another innovation for the genre was story. Final Fantasy introduced the story as the drive for the player through the game. Though this classic has probably the weakest of the stories in the main series, it is far more than just simply “go here, do this, fight that, and done.” There was some story line for the player to follow, people to talk to and get some history from, and some engagement into the game itself. This brought the player into the game experience even more, and provided a greater experience than had been seen to this point. The music…the music was and is a masterpiece of the video game world. It hit a place in the hearts of the gamers, and has become an instant recognizable tune around the world. The intro theme has been ranked in the top five of game scores since its release in 1987. And it did not end in Japan either. 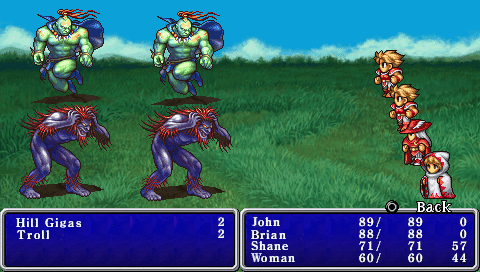 In 1990, shortly after the release of Final Fantasy III in Japan, they decided to give it a shot in the USA. And it was just as successful here as it was in Japan 3 years earlier. Everyone praised it for its graphics, and music. They loved the story and the detail placed into the game. We were so accustomed to semi-done games (Mario and Zelda aside) that this was a real eye opener to American gamers. And not only were the few D&D fans buying it, but non RPG fans were taking an interest in it. Suddenly it was becoming the first RPG to get recognized outside of its cliché. So much so that Nintendo Power did its first full issue strategy guide for non other than Final Fantasy. This very game right here, is the one that began everything. If this game had failed in the US, there would have never been a IV, VI, or VII coming within the next 7 years.
The only complaint there was came from the US in the amount of battling you had to do to level up and move forward in the game. Obviously they have never played a true RPG. Otherwise Final Fantasy has become something of a icon as far as games go. It is the one that began a series success that has rarely been surpassed. If you can get your hands on a original NES copy, or even the PS1 version with the hard mode, give it a shot. This is how true gaming used to be. 40-60 hours of pure enjoyment. Not the usual 10 hour fare found in games now.